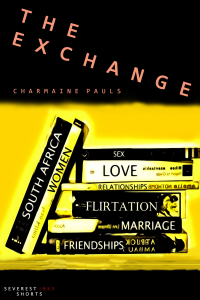 Let’s create a stage for a play called The Exchange. Imagine a country where there are multiple cultures, each with its own language and religion. Let’s put 51.7 million people in that world: 41 million black, 4.5 million white, 4.6 million coloured and 1.3 million Asian or Indian. Further divide the black population into four major ethnic groups: Nquni (Zulu, Xhosa, Ndebele and Swazi), Sotho, Shangaan-Tsonga and Venda. Each of these is made up of various subgroups. Don’t forget to split the white population into 60 percent of Afrikaans descent, and the remaining 40 from British or European origin.

To facilitate communication between the multilayered inhabitants, we’ll kick off with eleven official languages. These are English (9.6%), Afrikaans (13.5%), Ndebele (2.1%), Sepedi (9.1%), Xhosa (16%), Venda (2.4%), Tswana (8%), Southern Sotho (7.6%), Zulu (22%), Swazi or SiSwati (2.5%) and Tsonga (4.5%). There are more, but at least everyone should speak one of these languages, if not as their first, then as their second tongue. Each is a semantic whirlpool, the written form of some established as little as 70 years ago, that strives to convey meaning across a broad spectrum of belief systems and traditions. The tower of Babel recreated? Something like that. We’re going to call it the rainbow nation. Its graphical location is South Africa.

Next up is tossing some characters into the mix. There’s Maggie (divorcée), Reese (nature activist), Nel (lady of leisure), Pattie (struggling lecturer), Xandi (polygamous wife), and Amina (devoted wife). You couldn’t ask for a more diverse group, but that’s what our demographic stage is famous for. Add each woman’s personality and unique frame of reference to the scenario, and things should get interesting. Now that the backdrop is set and the cast has their script, we can get into the exciting part–the action.

First of all, The Exchange is not a political story. Our six cast members are from diverse socio-economic and ethnic backgrounds, brought together by a wine club, which later changes to a book club when Maggie becomes an alcoholic, so it’s all just an excuse to meet up. What will happen when an experience in Act One changes the emotional status of one member? The scale tips. The dynamic as a whole shifts and stimulates new behavior that changes the relationships of the group members with one another. In domino effect, this single event leads to others that shape the future.

Our stage spotlight will turn on each woman’s character in how they deal with Pattie’s seemingly innocent flirtation when a young bookstore owner, Erick, invites her for coffee. During Act Two we get to the central theme of the story. Pattie summarises it when she says to Nel, “We always want what we don’t have.” Pattie desires what Nel has–the showcase house, the fancy car, the diamonds, the overseas holidays… Nel wants what Pattie has–a faithful husband. Envy and jealousy slip into the friendship equation. At the apex of the conflict, the women’s true natures, and traits that they are hiding from even themselves, are bared. For every action there is a counter-action. This series of acts, one detonating the next, starts to implode on the cast’s internal and external environments. At the verge of a forked road where choice will map out the new path, words and intentions have a detrimental boomerang effect. As inner truths and self-destructive characteristics are exposed, ripped open by an explosive confrontation, Pattie has yet another choice: to face, or ignore it.

In the Act Finale we come to the realization that what plays off on stage is not a moral lesson. There are no protagonists or antagonists in our drama, neither rights nor wrongs. It is not about conflict brought on by differences in race or culture, but about how values are defined. Value is the universal language that spans across eleven official ones. But with differing values, can there ever be harmony? Can friendship prevail?

The Exchange is about six women, what they think they want, what they believe they deserve, and the road they choose when the grass seems greener on the other side.

Ladies and gentleman, the curtain lifts on The Exchange.

One thought on “Staging The Exchange”