Let’s create a stage for a play called The Exchange. Imagine a country where there are multiple cultures, each with its own language and religion. Let’s put 51.7 million people in that world: 41 million black, 4.5 million white, 4.6 million coloured and 1.3 million Asian or Indian. Further divide the black population into four major ethnic groups: Nquni (Zulu, Xhosa, Ndebele and Swazi), Sotho, Shangaan-Tsonga and Venda. Each of these is made up of various subgroups. Don’t forget to split the white population into 60 percent of Afrikaans descent, and the remaining 40 from British or European origin.

To facilitate communication between the multilayered inhabitants, we’ll kick off with eleven official languages. These are English (9.6%), Afrikaans (13.5%), Ndebele (2.1%), Sepedi (9.1%), Xhosa (16%), Venda (2.4%), Tswana (8%), Southern Sotho (7.6%), Zulu (22%), Swazi or SiSwati (2.5%) and Tsonga (4.5%). There are more, but at least everyone should speak one of these languages, if not as their first, then as their second tongue. Each is a semantic whirlpool, the written form of some established as little as 70 years ago, that strives to convey meaning across a broad spectrum of belief systems and traditions. The tower of Babel recreated? Something like that. We’re going to call it the rainbow nation. Its graphical location is South Africa.

Next up is tossing some characters into the mix. There’s Maggie (divorcée), Reese (nature activist), Nel (lady of leisure), Pattie (struggling lecturer), Xandi (polygamous wife), and Amina (devoted wife). You couldn’t ask for a more diverse group, but that’s what our demographic stage is famous for. Add each woman’s personality and unique frame of reference to the scenario, and things should get interesting. Now that the backdrop is set and the cast has their script, we can get into the exciting part–the action.

First of all, The Exchange is not a political story. Our six cast members are from diverse socio-economic and ethnic backgrounds, brought together by a wine club, which later changes to a book club when Maggie becomes an alcoholic, so it’s all just an excuse to meet up. What will happen when an experience in Act One changes the emotional status of one member? The scale tips. The dynamic as a whole shifts and stimulates new behavior that changes the relationships of the group members with one another. In domino effect, this single event leads to others that shape the future.

Our stage spotlight will turn on each woman’s character in how they deal with Pattie’s seemingly innocent flirtation when a young bookstore owner, Erick, invites her for coffee. During Act Two we get to the central theme of the story. Pattie summarises it when she says to Nel, “We always want what we don’t have.” Pattie desires what Nel has–the showcase house, the fancy car, the diamonds, the overseas holidays… Nel wants what Pattie has–a faithful husband. Envy and jealousy slip into the friendship equation. At the apex of the conflict, the women’s true natures, and traits that they are hiding from even themselves, are bared. For every action there is a counter-action. This series of acts, one detonating the next, starts to implode on the cast’s internal and external environments. At the verge of a forked road where choice will map out the new path, words and intentions have a detrimental boomerang effect. As inner truths and self-destructive characteristics are exposed, ripped open by an explosive confrontation, Pattie has yet another choice: to face, or ignore it.

In the Act Finale we come to the realization that what plays off on stage is not a moral lesson. There are no protagonists or antagonists in our drama, neither rights nor wrongs. It is not about conflict brought on by differences in race or culture, but about how values are defined. Value is the universal language that spans across eleven official ones. But with differing values, can there ever be harmony? Can friendship prevail?

The Exchange is about six women, what they think they want, what they believe they deserve, and the road they choose when the grass seems greener on the other side.

Ladies and gentleman, the curtain lifts on The Exchange.

Red In The Guardian 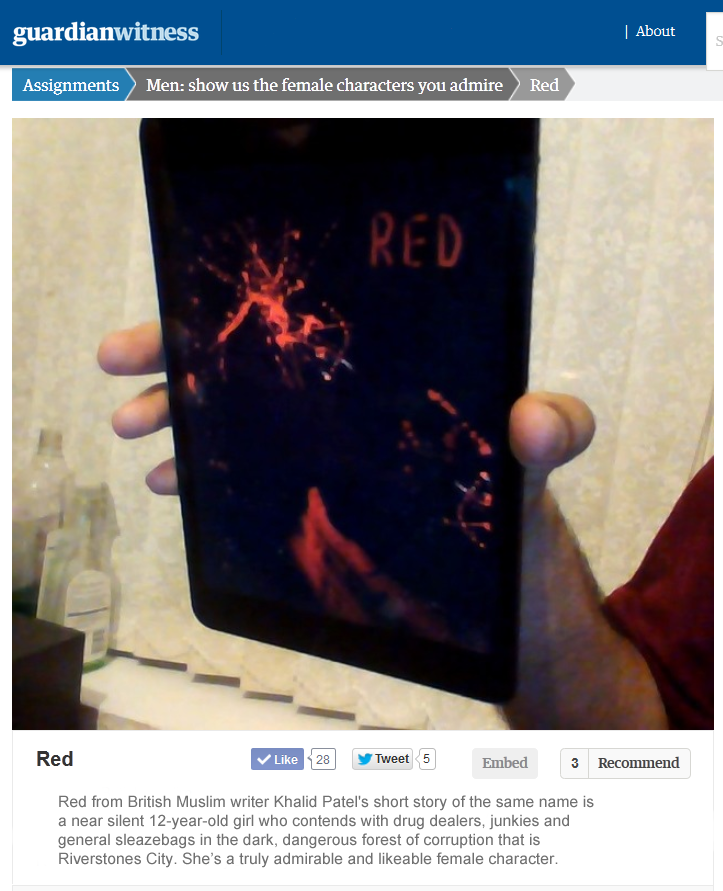 Red on The Guardian. Click on image for full article.

Acclaimed neo-noir crime tale Red by Khalid Patel recently received a nomination in British newspaper The Guardian for ‘The Female Characters You Admire’. Red was described as “a truly admirable and likeable female character.” Click on the image for the full article.

Available since Autumn 2013 in digital format, Red has recently been published by Severest Inks for the first time in paper, as a beautiful small chapbook that includes an accompanying bonus commentary by the author, Khalid Patel. Besides discussing the story, the commentary also provides hints towards the next outing in The Red Saga. Click here for more.

Faith And The Modern Poet

There are ground rules for the serious poet who, at twilight, sets aside the 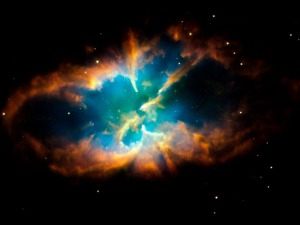 everyday, to experience the challenge of expressing the incomprehensible:

– God is beyond the sum of every faith. I am a Jew, but that is a baseline only. This morning, an article appeared in the MIT Technology Review detailing hard evidence that our cosmos was bruised by collisions with other universes; I hurry from the tent of the House of Israel to see fresh light.

– Your poetry is not personally yours; it is the product of the unconscious and it is –I’m convinced — collective, and with ancient memory. But the creation of the Torah, the Upanishads, the Qur’an and the Gospels were formed perhaps by more than the creative genius of our long lived souls. The King James Bible bettered Shakespeare by voicing faith; in “Kaddish”, the troubled Allen Ginsberg found the very flood of David’s songs. At night, when we are asleep, God may refresh in the waters we make.

– Science is the ally of faith. A poem masterwork has in common with the discovered law of a theoretical physicist that both are known to be right by their beauty.

There is then, no room for dogma:

I think when God
walked shy to Moses,
stars clustered in his hands,
he led our rabbi down
to the orchards of the heart.
The two walked near the other
and traded dreams like brothers
before sleep. They paused
afield and watched the sun,
lifted by themselves in unison,
race overhead. And Moses knew
not to disappoint this man
with faltering steps or speech.
God wept uncomprehending
of his artistry and Moses scratched
some lines in stone to honor
a beloved friend.

Because, if we are trapped by dogma, every poem will be a regret; As Mary Oliver writes, “I don’t want to end up simply having visited this world”. Better to leap out into the night sky, with your desires in tow:

That doesn’t mean we don’t feel a stranger among the stars: “Are you out of place here as I am?, writes poet Jacqlyn Costello, “as though we’re in a crowded bar”.

In the end, we can believe in and express a “monotheism of we”. It is, perhaps for the poet, the True Faith, that supersedes an Eden of waking universes. By writing down, poetically, what and whom we love, we catch hold of and give voice to what religious faith and the stars themselves are too impersonal to say:

When Masai raise
spearheads to Ngai
at his falling wordless
leave, they mirror unsheathed
swords of city heights, wavering
in the breath of the unseen.
All mystery is powerless
before the respiratory fate
of light as you wash your
face, your back to me.
It is time to admit, as
I brush sand from
your feet, the odds
that a universe dimmed
will draw you in again for release.
You will be lost as four hundred
planets at first count are waterless,
or put in safekeeping of molecular cloud.
Somewhere distant, I will be noble
gas or fleeting charge. We will
meet, but incorporeal as gods.

Charles Bane, Jr is the Pushcart Prize-nominated author of The Chapbook (Curbside Splendor, 2011) and Love Poems (Kelsay Books, 2014). The Huffington Post described his work as “not only standing on the shoulders of giants, but shrinking them.”

ENTER YOUR EMAIL ADDRESS BELOW TO BECOME A CERTIFIED MEMBER OF THE SEVEREST INKS SCRIBES
Members shall receive exclusive news, offers, discounts, updates, bonus material and more. You will receive a confirmation email shortly after signing up requiring you to confirm your Follow.